For too long, the mind-warping constructs of society and the unfathomable pressures placed on young women and men as a result of social media perfection have plagued our world. We, as perfectly imperfect human beings, more frequently than not, struggle with body positivity and find it simply too difficult to just love ourselves for who we are. But hip-hop star, Miss Eaves, a champion of self-appreciation, says enough is enough, and it is in fact happiness and acceptance we should be striving for, not just photo-friendly washboard abs.

Shanthony Exum, better known as the Brooklyn–based multimedia artist and rapper, Miss Eaves, is a fun, fearless and unapologetically feminist maverick when it comes to playing by your own rules. After finishing art school, she began pursuing a career in music. Having been a visual artist for most of her life – she describes music as coming secondary to her through a visual perspective. Her first experience in the music world was as part of a noisy, rap punk band, which came to an end in 2012. “It was super silly,” she said. “We had electric tracks that I would scream rap over about really stupid stuff, like drinking with a bendy straw or making things out of paper mâché. “I’m not so proud of it now. It’s definitely one of those things that was better to hear live than on a recording.”

After this band, Exum decided to make music on her own by starting the Miss Eaves project, releasing her exciting and perspective-changing EP Black Valley, in 2015.  On this record, featured single ‘TNT’, which Miss Eaves defiantly and cleverly used to address issues of street harassment and body positivity, not least in the rap game. “’TNT’ was confronting people who were catcalling, harassing and objectifying me, by telling them that I will explode on their ass if they do this one more time,” she said. “In so many rap videos the women are being objectified so much, so for the ‘TNT’ video I made a point of casting conventionally attractive men and hardcore objectifying them in the same way to make that juxtaposition.”

Looking at Miss Eaves’ more recent releases, intersectional feminism is still a theme found at the heart of her music, as she encourages women of all sizes to flaunt their ‘Thunder Thighs’ and celebrates female pleasure on ‘Hump Day’.  This empowering release was also featured in the animated Netflix series Big Mouth, which follows the stories of teenagers navigating the rollercoaster ride of puberty. Reflecting upon her own sex education, Shanthony wishes that she had learnt earlier to advocate for her own pleasure, and to be clear what her own needs and wants are. Fast forward to the present day amidst a global pandemic, Miss Eaves’ catchy, upbeat track ‘Belly Bounce’ has people all over the world filming themselves dancing and embracing their bodies.

Everyone involved is so full of joy, and it’s pretty impossible to listen to the song and not want to get up and let that belly bounce. “Dancing is a great way to get caught up in a moment,” she adds. “You’re not thinking about how you look, but more about how you’re feeling and expressing yourself. “I don’t think I’m the best dancer, but it was so much fun because I was just goofing off and being myself.” Her inspiration for the track is personal, as people have often mistaken her for being pregnant or told her to suck her stomach in.  Miss Eaves acknowledges that this sort of shaming is common but hopes to give others the confidence to feel beautiful.

She said: “Most people don’t have washboard abs, whether it’s a little pooch or a bigger belly, it’s just a part of life. There are so many different body types, but so much of popular culture is telling us we should celebrate being thick, but only when it comes to your boobs or your ass, and your stomach is supposed to be completely tight. So many songs say “shake that ass” or other parts of the body more normalised as being okay to be big, but why don’t we just normalise everything being big?! I think ‘body image’ depends on what we’re putting into our minds. If we’re only looking at people who have these impossible, surgically made body types, we’ll feel bad for not looking like that.

“I think the more we expose ourselves to different people, the more we’ll start to feel good about ourselves. We can see bodies that are similar to our own and think they are great and beautiful, because we’re always going to be more self-critical. “It’s important to catch yourself in those moments where you wish your body was different, and challenge where these thoughts come from. It usually isn’t something that originated in your own head.” Miss Eaves has also rapped about the nightmare of online dating on ‘Left Swipe Left’ and how amazing single life can be on ‘Paper Mache’.

When it comes to her own attitudes towards dating, communication, respect and mutual support are important. “So many people are socialised to think that having a partner is a goal to reach, she states. It used to make me feel pretty bummed out and lonely. This year I started seeing someone during the quarantine, but I began to question whether they actually liked me.”

“I ended up asking them and when they couldn’t give me a direct answer, I decided we were done. My new attitude towards dating is that I’m happy being single, I get to work more on my art and get to have deep friendships. People always want to prioritise romance, but there are so many other fulfilling relationships you can have. Now in the pandemic, dating is no longer a priority. If I happen to meet someone in my normal life, that would be great but I’m not seeking it out to fill a gap in my life that society tells me is there. The perfect relationship for me would be one where we really respect each other, appreciate each other’s strengths and weaknesses.” 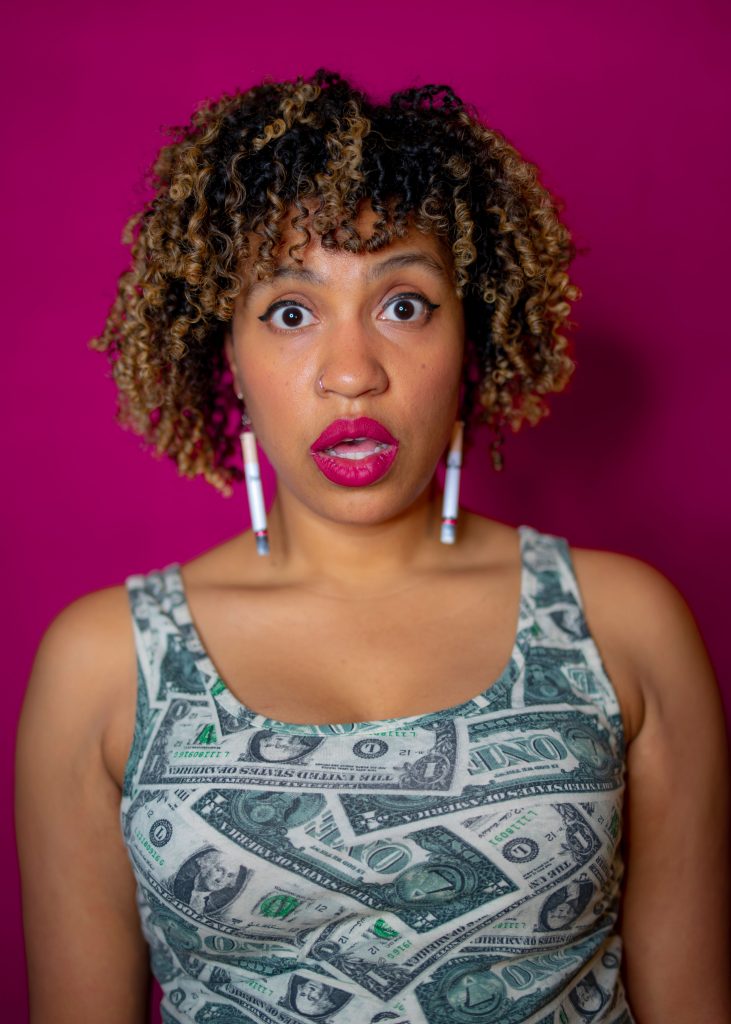 As an avid French learner, Shanthony went to Canada for a month at the beginning of February for a French programme. Two weeks into it, the pandemic happened, and the borders closed. While the rate of Covid transmissions in New York was still high, Shanthony didn’t feel comfortable going back and has remained in Canada since. “At some point I think I might want to immigrate here so I really need to work on my French,” she said. “I’ve been studying French every day since the beginning of the pandemic for three to five hours. With my anxiety, the first month and a half of quarantine was really hard. The uncertainty was really triggering and overwhelming to me. I was living in a country that I was not a citizen in, and I didn’t know how the healthcare system worked. It was really hard for me to be creative. But I suddenly had the inspiration to make a video for ‘Belly Bounce’. I’ve also started trying to sketch faces every day and have been working on a crafting show called Garbage People – it’s about recycling and the host is a giant skeleton dinosaur.”

With the music industry on hold, the majority of Shanthony’s work at the moment is design related.  Miss Eaves has often rapped about the struggle of balancing a lot of side hustles and in ‘Stacks’, ‘3 Jobs Not Rich’ and ‘Exposure Kills’. She said: “I recently illustrated a comic strip about a woman’s abortion story for We Testify. “I also work with Black Futures Lab and Black to the Future Action Fund, an organisation founded by Alicia Garza who co-founded Black Lives Matter. “I do a lot of their social media logos and report designs. I love being busy and creative. It’s great that my work now aligns with my politics.‘3 Jobs’ is maybe not so much about my life now; I’m working with people in social justice who pay me a fair wage. At one point in my life, I was stuck in this gig economy working so many jobs being underpaid and undervalued for my work. I saw my friends struggle with massive loans they couldn’t pay off because their income was not sustainable.”

Miss Eaves’ next tour was due to take place in Germany in September but, that was cancelled. While you may not be able to catch Miss Eaves on tour this year, as a result of her September touring being cancelled because of coronavirus, the star says there is no excuse to not empower yourself – even if that means having to Belly Bounce at home. “Don’t be afraid to try new things,” she encouraged. “People often think they’re too fat or old to be able to do something. I would love for people to remove those barriers, because they’re pretty arbitrary, and just do what you wanna do. If you decide to do something, and you’re genuinely excited about it, focus on the love and the passion and the results will come.”

Stay up to date with Miss Eaves:

Polly Money shares debut EP ‘Trip2020’
EP Review: Sad Girls Club by Veda Black
To Top
We use cookies to ensure that we give you the best experience on our website. If you continue to use this site we will assume that you are happy with it.Confirm